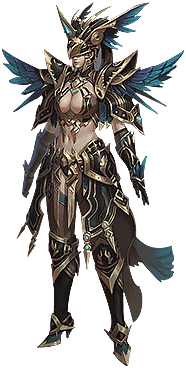 Masters of the arrow, deliverers of death from afar.

Devotees of the lunar goddess Qune, Segita Hunters emulate their patron by bringing light to the darkness and overseeing all that dwells beneath the sky. Like the moon, Segita Hunters are a faint light amidst the shadows, so the best way to survive is remorseless and overwhelming attack from a position of safety. This approach is why the bow and crossbow are so favoured among their ranks, with a few dagger techniques for times of desperation. In addition to their legendary skill with ranged weapons, Segita Hunters are also highly mobile, and skilled at snaring or immobilising targets to cover a retreat to a safer attack position. A Segita Hunter armed with a bow can rapidly loose a torrent of arrows, whereas crossbow attacks are less frequent but carry much greater force.

Archer: Some of these skills require a bow or crossbow; others can be used with both. All deal exceptional damage.
Dagger strikes which do not deal much damage, but can be used for distraction or delay.
Hunter: Powerful ranged attacks, plus a few support skills.

Physical Offense: Excellent at dealing damage to multiple targets, from a safe distance.
Magical Offense: Some higher level skills include additional fire or ice damage.
Defense: Ill-suited to close combat. Melee skills are for slowing and distracting, not killing.
Support: A few self-buffs and debuffs, but primarily focused on pure offense.