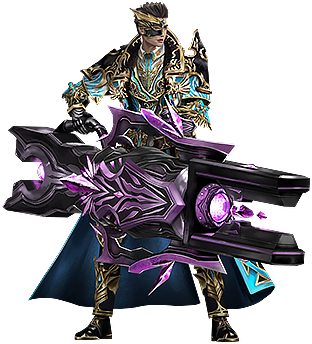 The marksman , powered by the synthesis of magic and technology.

The men were vastly outnumbered by the women of the Segita tribe. So most of the males have shown their exceptional aptitude in crafting or Hextech research, rather than specializing in combat skills. Their research breakthrough was when they succeeded in refining fragments of Karon collected from the Abyss of Crespo, allowing them to imbue these with attributes of lighting and fire. They are the hunters and guardians of the Segita tribe using "Pierce", imbued with the element of lightning and "Blast", imbued with the element of fire. These elemental crafts are the perfect instruments to overcome enemies from a distance.

Meister Titles
Grand Cross: Destructive damage in a cross-like form towards the target area.
Last Defiance: Discharge the burning blue flame of Qune, which will instantly stun and inflict damage to the target.
close
Welcome to Dekaron on VFUN