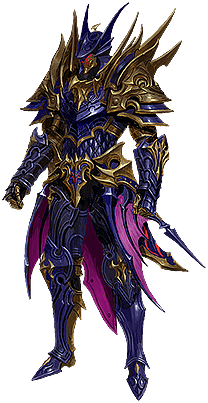 Empowered by primal entities to afflict, aid, and endure.

Pledging the same spiritual pact as all Summoners, Vicious Summoners are slightly tougher than their Conserra counterparts, but only slightly less deadly. They employ similar combat techniques too, either manifesting Chakras and clouds of poison via staves or slicing through enemy ranks with poison-augmented twin swords. Vicious Summoners can call upon a wide variety of summoned creatures, which offer varying strengths and weaknesses. They are only slightly distinct from Conserra Summoners, and still very balanced between defense, support, and damage. Their stealth ability is less impressive, but Vicious Summoners can also magically leap across battlefields for surprise attacks.

Domination: Staff skills conjure large poison clouds and Chakra buffs and debuffs.
Combat: Inflict physical and poison damage to multiple nearby targets with twin swords.
Alteration: A few limited but useful skills.
Summon: Call one of a variety creatures, who fight alongside you until dismissed or killed.

Physical Offense: Steady physical damage over a wide area, and some hard-hitting minions.
Magical Offense: Augment physical attacks with poison, deal pure poison damage via staves, and summon creatures with various types of magic attacks.
Defense: The slightly more resilient Summoner class, but not meant to be receiving constant damage. Summoned creatures can serve as helpful distractions.
Support: Staves can summon Chakras to grant potent buffs and debuffs in a limited area. Limited stealth ability, and can pull allies to their location from across the battlefield.