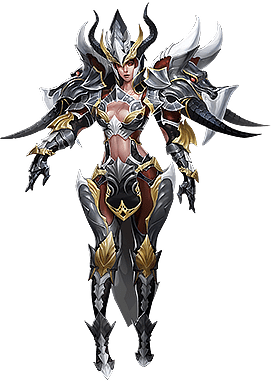 Walking the line between measured discipline and unshackled fury.

Unions between humans and Bagi are not unknown. But the Half Bagi offspring who occasionally result are generally rejected by both races. Half Bagi inherit the curse of Karon’s Spirit, but its hold on them is not so total as their Bagi parents. This allows Half Bagi finer control over this power, and their more measured human minds gift them the focus to build and expend it at opportune moments. The training and discipline that all Half Bagi employ to this end is known among them as Fury, and it functions as an additional resource for their abilities beyond MP, albeit one that can only be gained by dealing damage to enemies. Whether with their massive swords known as falchions (pulsions, in some dialects) or a pair of bladed gauntlets called katars, Half Bagi employ a wide variety of damaging skills during combat, rather than steadily escalating their base power as full-blooded Bagi warriors do.

Falchion: Great sweeping attacks which cover a wide area.
Katar: Rapid attacks against fewer opponents than falchions, but higher damage against them.
Fury: Channel and unleash rage at the right moment for temporary boosts of power.

Physical Offense: Either of the Half Bagi’s weapon types deal substantial physical damage.
Magical Offense: All attacks are purely physical, no capacity for magic damage.
Defense: ot quite as tough as full-blooded Bagi warriors, still some of the best defenses around.
Support: Just a few minor debuffs inflicted by attacks.

Venatoris: Focus on katar attacks to rapidly demolish a single target, further reducing its defenses.
Extreme Rage: Additional falchion skills to damage and debuff many targets across a wide area.
close
Welcome to Dekaron on VFUN